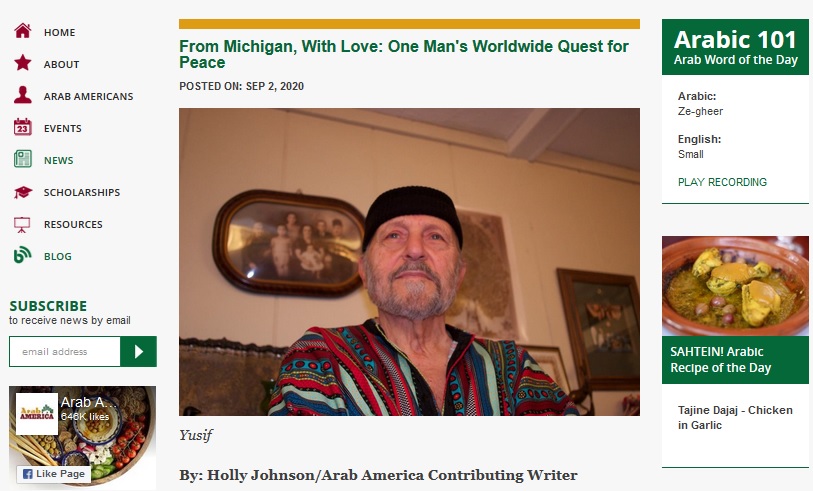 Hello Friends!  The online resource Arab America recently published an article about my lifelong, worldwide quest to promote those values we all hold dear.  Read below or see the article on their site here: https://www.arabamerica.com/from-michigan-with-love-one-mans-worldwide-quest-for-peace/

Peace, love, truth, and compassion. These are four adjectives that Yusif Barakat lives by.

Known simply as Yusif, Barakat, an 85-year-old advocate for harmony, has spent more time than he can count getting into, as John Lewis so eloquently stated, “good trouble.”

Born in 1935 in Haifa, Palestine, Barakat recalls idyllic childhood summers spent swimming in the Jordan River and riding horseback with his warm, yet remote father. For all of his boyhood fun, Barakat’s childhood came to an abrupt end at the age of 12, when his family was forced to flee Palestine following the Israeli occupation. “I can remember things changing almost in a matter of a day. We went from a normal family with no traumas to fleeing violence and running for our lives,” said Barakat when asked about their sudden move.

“I remember seeing these tall buildings and yellow cars that seemed like something out of a fantasy story once we docked, and wondering if somehow I had made it to outer space.”

Although Barakat admits that his precarious age shielded him from the enormity of their situation, he recalls staring over the bow of the ship, his gangly, youthful legs lengthening with the perch of the tips of his toes, trying desperately to catch one more peek at the majestic region he called home.

Seven days at sea did little to alleviate his family’s nerves as they docked at Ellis Island with the looming New York skyline providing an unusual backdrop. “I remember seeing these tall buildings and yellow cars that seemed like something out of a fantasy story once we docked, and wondering if somehow I had made it to outer space,” recalls Barakat. It was here, disembarking from that fateful ship, that Barakat resolved to be a force of change, in the hopes that no one else would have to endure the heartache and suffering that his family had upon their forced migration.

Despite the shock of assimilating to an entirely new culture, Barakat and his family worked diligently to familiarize themselves with American customs in an effort to not only blend in socially, but to survive financially. No stranger to hard work, thanks in part to his Arab heritage, Barakat found himself accepting his first job offer at 14, delivering newspapers. Working rain or shine, Barakat gave any money he earned to his parents to help with expenses.

At the age of 16, tragedy struck the Barakat family, as his father passed away unexpectedly. Already accustomed to helping his family with expenses, Barakat’s giving nature rose to a higher level when he began to work two jobs in between school assignments and household chores, assuming the role as his family’s protector and provider.

Undeterred by struggles sent his way, Barakat persevered, continuing to provide for his family while pursuing higher education, becoming a revered psychotherapist notable for his work with juveniles, as well as in family therapy and drug rehabilitation. Although Barakat’s chosen profession offered the ability to help others, the opportunity for serving the public in a larger role came knocking on his door in 1972, when he ran for U.S. Congress in the state of Michigan, losing by three-thousand votes (the number of Republican voters in a predominantly Jewish neighborhood within his district).

“In a time of great upheaval, war, and social change, I ran as a bearded Palestinian with a progressive platform, urging people to think outside the box,” said Barakat.  “I was ahead of my time.”

“My whole life has been about helping others and raising the collective consciousness. I believe in goodness in people, and compassion, which is found within.”

Though Congress was not in the cards for Barakat, his elation at having discovered like-minded citizens who sought peace spurred his desire for harmony, inspiring decades of worldwide travel in the name of activism.

Between days-long marches protesting Gaza blockades, to being detained on civil disobedience charges at Williams International advocating for the cessation of bombs, Barakat has never wavered in his belief of innate purity in the world. “My whole life has been about helping others and raising the collective consciousness. I believe in goodness in people, and compassion, which is found within.”

Following decades of protests, marches, campaigns, and public speaking engagements, Barakat was approached by the FBI in 2008, told by agents that someone had turned him into the bureau for being an “anti-American, terroristic threat” to the United States. In true Barakat-fashion, within an hour of inviting the luxuriously clothed agents into his home, the threesome had become fast friends, trading stories, and laughter over tea. While the premise of his encounter with the FBI set a disappointing tone for Barakat, he remains steadfast in the notion that although he did not actively choose to settle in the United States, he loves this country and the liberating tenets for which it stands.

To date, Barakat continues to defy societal norms by remaining active in both personal and professional endeavors. Continuing his efforts for promoting peace, a feature film production and literary series are current dreams of his, as he seeks to both educate and motivate others about the dangers of conflict. When he’s not traveling the world or launching peace talks, Barakat can often be found swimming daily in the lake by his home or walking three miles a day with his and his neighbor’s dogs.

A beacon of light in a world that can be touched by darkness, Barakat remains devoted to touching lives one higher consciousness at a time.

This site uses Akismet to reduce spam. Learn how your comment data is processed.